It must be said that I’m not the world’s biggest online multiplayer gamer. I’m also nowhere near the most enthusiastic of rootin’, tootin’ shootin’ gamers. I’m also pretty good at refusing to get wrapped up in the hype that precedes and accompanies the big triple AAA titles these days.

So, Evolve, a mostly online multiplayer shooter that has been hyped to the nth degree for the best part of a year could be a serious test for my gaming prowess.

But thankfully it’s not. Because even the most sceptical of players couldn’t complain too much about what it does. Because when it works, it works bloody well indeed. And when it doesn’t work, well…that’s the fault of the online gaming service it heavily relies on. 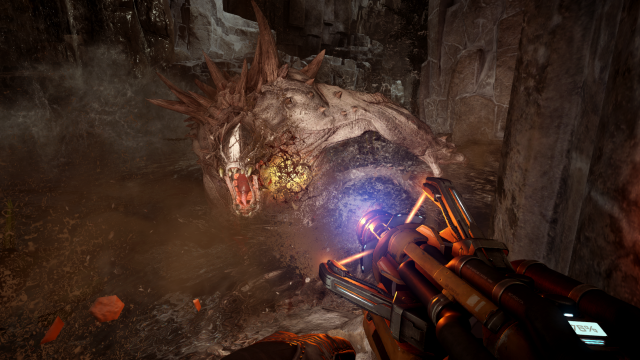 Set on the distant colonised planet of Shear, Evolve plays out through a number of match ups between the (mostly) human Hunters whom have been drafted in to help save the colonies, and the alien Monsters who have found their way into deepest space with the express intention of destroying everything before them. Being honest, the story is really neither here nor there and quickly fades into the background as the fighting thankfully takes centre stage.

And it is with the battles that Evolve will bring some of the best multiplayer encounters of recent times. With a team of Hunters consisting of four distinct and unique classes and controlled by four human players going up against a fifth Xbox Live player taking on the role of the Monster, roaming around as a wildlife eating, mammoth beast, it doesn’t take long before all hell breaks loose. And when things kick off, they really do kick off big time with some fast fluid shooting, dodging, and regrouping all needed in order to come out victorious.

There are four game modes in all; Hunt, Rescue, Nest and Defend, all with slightly varying objectives for both sides to complete. However, being perfectly honest, the vast majority of battles will turn out to become a fight to the death, with the Monster hiding away in the shadows, chomping on wildlife, trying not to give away their position until they have ‘evolved’ enough and become large enough to take on the crack team of Hunters, or at least attempt to take them on!

With four Monster types to get to grips with, all with completely different play styles, special moves and abilities, the hours you’ll need to spend in order to experience Evolve completely will keep increasing by the day. That is mostly due to the fact that you start off with access to only the first of the huge beasts. Goliath, as the name suggests, is a rock-throwing, fire breathing brute and only once you’ve leveled him up enough, gaining plenty of XPin the process will you gain access to the flying electric Kraken, the stealthy Wraith or the biggest Monster you’ll find in the game, the downloadable Behemoth! There is unfortunately a great deal of grinding needed in order to unlock all the Monsters but due to the fact you are always playing against a team of humans (as opposed to the usual AI on offer in games), each and every match up can turn out to be completely different and for the majority of the time, keeps the battles on Shear pretty fresh. 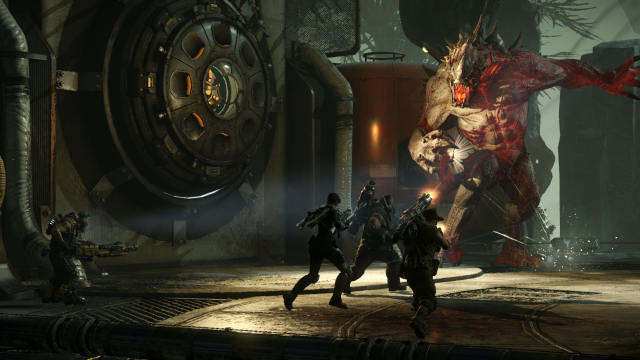 The same leveling up process goes for those who turn to the hunting team. With four different classes, and up to three differing characters for each to be unlocked, the grinding that is required on the Monster side of things, raises its ugly head again here. Perhaps not to such a great degree, as the choice to go into battle as the Assault guy, a medic, the support class, or the most important of the lot, the Trapper, brings completely different experiences each time. A team of hunters, working together with a plan at hand, will, nine times out of ten, defeat even the most skilled, most evolved of beasts. However, as is the way with many online Xbox Live enabled titles, if you go into battle with a team of loners, all sitting in various separate parties and not communicating, then the chances are you’ll become more frustrated as time goes on. I’m loathe to mark Evolve down on that side of things though as this is much more of an issue with the network and Xbox Live service in general, rather than what Turtle Rock and 2K Games have given us.

Throughout proceedings, the visuals on offer are first class. Both the, thankfully infrequent, cutscenes and indeed the actual in-game graphics are some of the best you are likely to see on the latest consoles. Environments are hugely detailed and look gorgeous, albeit a little samey, and the twelve maps that you’ll go to battle in are large, well thought out affairs that don’t benefit either side of the fight due to the abilities the Monsters have and the jet packs that are strapped to the back of the Hunters. There are slight concerns that further maps, more Hunters and bigger badder Monsters will have to be included at a later stage to keep things fresh but as long as there isn’t too much of a wait for these, the current inclusions should be more than enough for most. The inclusion of custom matches in which you can alter the balance of the game, including extras like a second monster or additional carnivorous plants mean that if you do get a bunch of friends together, then the options are pretty damn open for you to go about things the way you really want to.

I have to admit however to being hugely disappointed with some of the voice overs that have been included, with stale uninspiring affairs having to be tolerated each and every time you wait for the drop ship to hoist your newly created body back into battle after death. But then, if you don’t die, you won’t have to experience those! 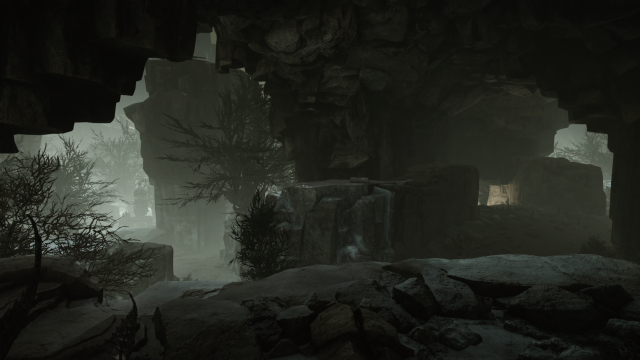 And then unfortunately we get round to the solo player campaign. Something which knocks Evolve for six.

Because whilst the joy of playing with others online stops Evolve from being anything other than a success, the inclusion of a solo player mode seems to be a bit tacked on. Normally I’d complain that a game fully focused on a single player experience has incomprehensibly had a poor multiplayer side thrown in to keep the masses happy, but with Evolve, things are completely the opposite, but just as disappointing.

Evolve is a superb multiplayer experience and Turtle Rock really didn’t need to go down the ‘let’s chuck this single player in here for the fun of it’ route. With the exact same modes as those found online, just with some rather useless AI bots taking control of either the monster or the Hunters, the whole solo thing is disappointing to both see and take in. Without the addition of fellow gamers taking on the role of other Hunters, the whole ‘hide and seek’ feel that comes with Evolve is removed, instead replaced by a few minutes of wandering around ‘hoping’ that you’ll manage to stumble upon an unsuspecting AI controlled opponent, before a quick fire fight sees you needing to rinse and repeat over and over again. The only real saving grace for the solo campaign (as indeed with a multiplayer match that contains bots), is that a quick hit of the d-pad can see you changing between open characters on the fly.

But don’t let the whole issues surrounding anything not multiplayer connected put you off. Overall I’m more than happy with what Evolve has given me. From a non-shooting, mostly solo playing background, it’s good to see a game that is so heavily focused on a shed load of online spraying is able to bring such pleasure.

Evolve is just something that just begs to be played with a group of friends, all micced up, beer in hand, having a laugh for a few hours whilst they wile away the late winter evenings and pound their virtual bullets or mammoth paws into their opponents.

Especially if you can get a decent group of Hunters together!