From the very first press of the start button and the initial cry of ‘Resident Evil’ you know you are in for something a little special with Resident Evil Revelations 2.

Set after the troubles in Resi 5, Revelations 2 is not only a distinctly different game to that found in the standard Resident Evil series, but a much more complete experience. In fact it’s something that the Resident Evil series as a whole has possibly been crying out for for a while. A bit of a refresh then.

Being released as a series of episodes over the course of a month or so, the first chapter sees you take control of two of the series most loved characters, Claire Redfield and Barry Burton, alongside their friends and colleagues, Moira and the ever so slightly creepy Natalia. 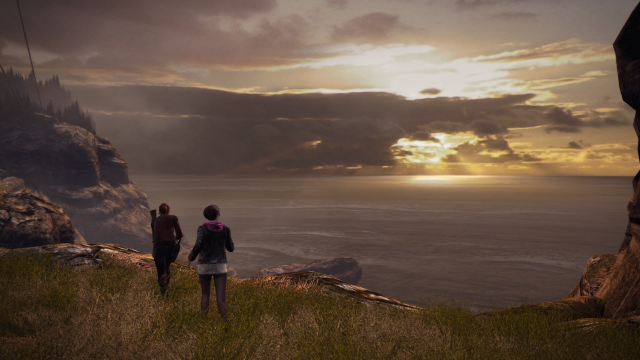 We first meet Claire and Moira as the girls are attending a large corporate party for anti-bioterrorism organisation, Terra Save, drinks in hand chatting about the world in general. But once the lights go down and the swat team begin to descend on Redfield, the action really starts to pick up.

It is from here that you find yourself controlling the action from Claire’s point of view. Placed in detention on a dark island it doesn’t take long before you find Moira locked up in a nearby cell. With strange wristbands attached and a voice beaming out down the corridors, the ladies need to search the halls, the corridors and every nook and cranny in an attempt to solve the puzzles laid in front of them, dodge the monstreous enemies that are inhabiting the prison and eventually escape the island. And it is their SOS call from a long lost radio tower that eventually sees both Barry and the young Natalia enter the field.

With Claire fully tooled up with pistols and the like, she works brilliantly alongside a shyer Moira who has nothing more than a crowbar and torch to help her get around. What she lacks in pure firepower however she more than makes up for in cunning and it is whilst controlling her that you’ll find the numerous hidden secrets and collectible gems that are scattered around. Oh, and the fact her torchlight can stun even the most fearsome of undead is a delightful bonus. When it comes to taking in the action as Barry, he is, as you can expect, a fully walking talking one man zombie killing machine, whilst young Natalia complements his robust approach beautifully as she uses all her cunning, and her special ‘I see dead things’ vision to great effect. 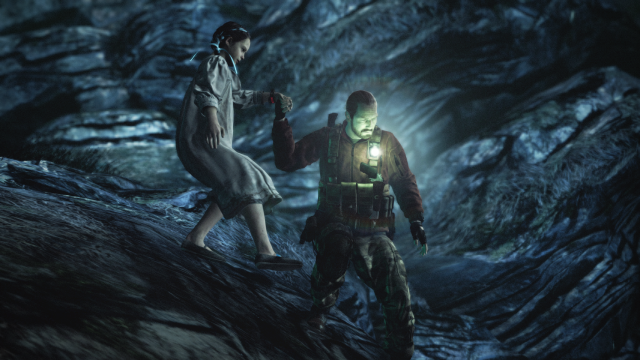 Switching characters on the fly gives you the chance to take on the monsters that inhabit the prison complex and indeed the wilderness of the island superbly with the emphasis on character and team building a huge one. With Claire and Moira working nicely together inside the prison and Team Barry/Natalia dealing out justice on the outside, the inclusion of numerous playable characters is a masterstroke. It would have been lovely to see the frankly stunning local co-op translate over to the Xbox Live scene but the exclusion of any real online multiplayer hasn’t harmed Resident Evil Revelation 2 too much at all.

I think it’s fairly safe to say that the Resident Evil franchise has, over the past few years, dwindled down into nothing more than a title for older gamers to occasionally hark back to whenever the survival horror genre is mentioned. Even the rebooted original remade in glorious HD did nothing for me but thankfully, Revelations 2 is a different kettle of fish and has enough charm, enough puzzle and just the right amount of gore to make it worth a look or two.

And without ruining the story, that is pretty much about all I can say for Episode 1. With something that can be completed fully in around 2.5 hours, you’d normally be looking for a great deal of replayability to make it worth the cash. There is obviously the option to go back and play through the whole chapter once more on a slightly more taxing level, or of course you could grab a local partner and experience the scares together. The main way of spending the time between chapters will however be to take in the rather decent Raid mode.

With much more of an arcadey feel to things and much less emphasis on ammo preservation and puzzle solving, the Raid mode gives you the chance to run through a few short and sharp missions with the express intention of killing zombies as quickly as you can. Do well and you’ll receive rewards aplenty and enough customisation points to see you covered about raising your characters skills in such a way that you’ll want to go back and hit the challenges over and over again. With the addition of daily missions that will no doubt change as further episodes release over the coming weeks, Raid is a lovely way of passing the time whilst we wait to take in more of Claire, Barry, Moira and Natalia’s stories.

I’m not sure exactly what is being gained from releasing RER2 as a series of weekly digital downloads but if the rest of the episodes are even half as decent as this first one has turned out to be, Capcom are on to a bit of a winner.

It looks good. It plays great. Resident Evil is back. In a big way!

Even the numerous micro-transactions can’t hold it back.